After being a struggling entrepreneur myself, I have a strong passion for applying entrepreneurism into settings outside of the privileged, well connected, ‘suited and booted’ stereotypes it’s normally associated with, and in particular in the application of entrepreneuring (the doing of entrepreneurial activities) to disadvantaged groups, and those we might consider as ‘at-risk’ of falling out of society’s support and favour.

As the subject of my PhD research regards how entrepreneuring can help groups in at-risk circumstances, I wanted to ground the research in evidence and opinion by those on the front line of service provision.  With the support of my supervisor Prof Munoz and funding from the Centre for entrepreneurship, we arranged for five local organisations who work with ex-offenders, homelessness, drug addiction, reemployment and a young person advisory service, to take part in a three-hour focus group session.  We wanted to hear first-hand what the front end of service provision thought were pressing issues, rather than start the PhD based on presumptions.

We challenged each of the providers to think of the three biggest challenges to their sector and its ability to support clients in today’s society, we then took these as a starting point at the opening of the focus group.  After a group discussion we began to identify similar concerns across providers, similar causes, and similar impacts.  We broke this down further, digging into the detail of why these issues were pressing, with conversation moving from their specific role, to that of the organisation, and the effects on the client groups.  By the end of the session we could draw out definite themes in issues put forward, which afterwards myself and Prof Munoz could begin to analyse.

By going through the video evidence of the focus group and by delving into research outside of business and entrepreneurism, we began to establish six themes which presented as challenges to service provision ranging from stigmatisation, to recognition and identification of issues.  More importantly however we also began to realise that these themes existed across all levels of the service provider ecosystem – from the individual ‘at-risk’, up to society as an all-encompassing context.  This may sound fairly obvious, but the implications for actually supporting people who are existing in ‘at-risk’ contexts, means that effective support cannot just be ‘siloed’ into one neatly funded programme which helpfully ticks boxes – the current and traditional approach taken.  To help support effective and lasting positive change, not only do the root causes of issues need to be addressed, but also the wider contextual, environmental, societal issues and political discourse concerning the issues, need to be addressed too.  Within the report particular repeated discussion is made regarding the impact the media has in demonizing and vilifying certain groups of people, drawing on concepts of folk devils and the creation of moral panics.  Although the primary purpose of the media is to generate profit, it worryingly also acts as a driver for political opinion.  We found the challenges created by the media as significant in its ‘tidal weight’ pushing back against service provider support programmes. 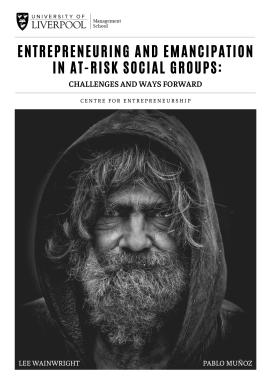 It was at this stage of analysis that the START table began to take shape as a model which accounted for the breadth and width of the challenges and their contextual impact.  With this table we were able to formulate pressing questions which act as starting points to further research.  But how does entrepreneuring come into play?  From the report we are able to layout and frame the challenges as complex and interconnected phenomenon’s which range from the micro to macro in their enactment.  Therefore, any effective pathways of support for at-risk groups (of which some already exist, including the offender employment programmes Timpson’s offer), need to be capable of effecting positive life change across all of these levels by creating new purpose for the individual, a sense of authorship and control, of positive network building, and providing chances to build human and social capital to gain access to pro-social opportunities.  Pathways need to help to emancipate the individual or group out of the negative oppression of one label – addict, ex-offender, homeless etc, and help transition them towards a positive label supported by society.  The entrepreneurial journey is one such pathway which has significant potential to act as a route to emancipation.

Through the creation of the ‘Entrepreneuring and Emancipation in At-Risk Social Groups’ report we also felt the findings and discussion could work well as a short academic paper.  As such after a few rewrites the paper was submitted to the Journal of Business Venturing Insights and is now at a revise and resubmit stage, which is fantastic to have reached within the first half of year one of the PhD, and is testament to the impact of excellent supervisory support.

The next step for the report alongside a print run, will be an event this summer to bring together the original focus group members and many more service providers from across the North West to discuss the questions it has generated.  We hope to develop the conversation regarding emancipatory pathways and the role entrepreneuring can play, informing not just the entrepreneurship literature and the traditional capitalist view of entrepreneurship, but also the third sector and government policy.  A second edition of the report is possibly in the pipeline towards the end of this year and will benefit from the data collection stage having been undertaken for the PhD.

Ultimately, hopefully in some small way the report will add to service provider discussion concerning how pathways which support at-risk groups are developed, and possibly can act as talking point for people from all industries regarding how we treat people in difficult life circumstances.